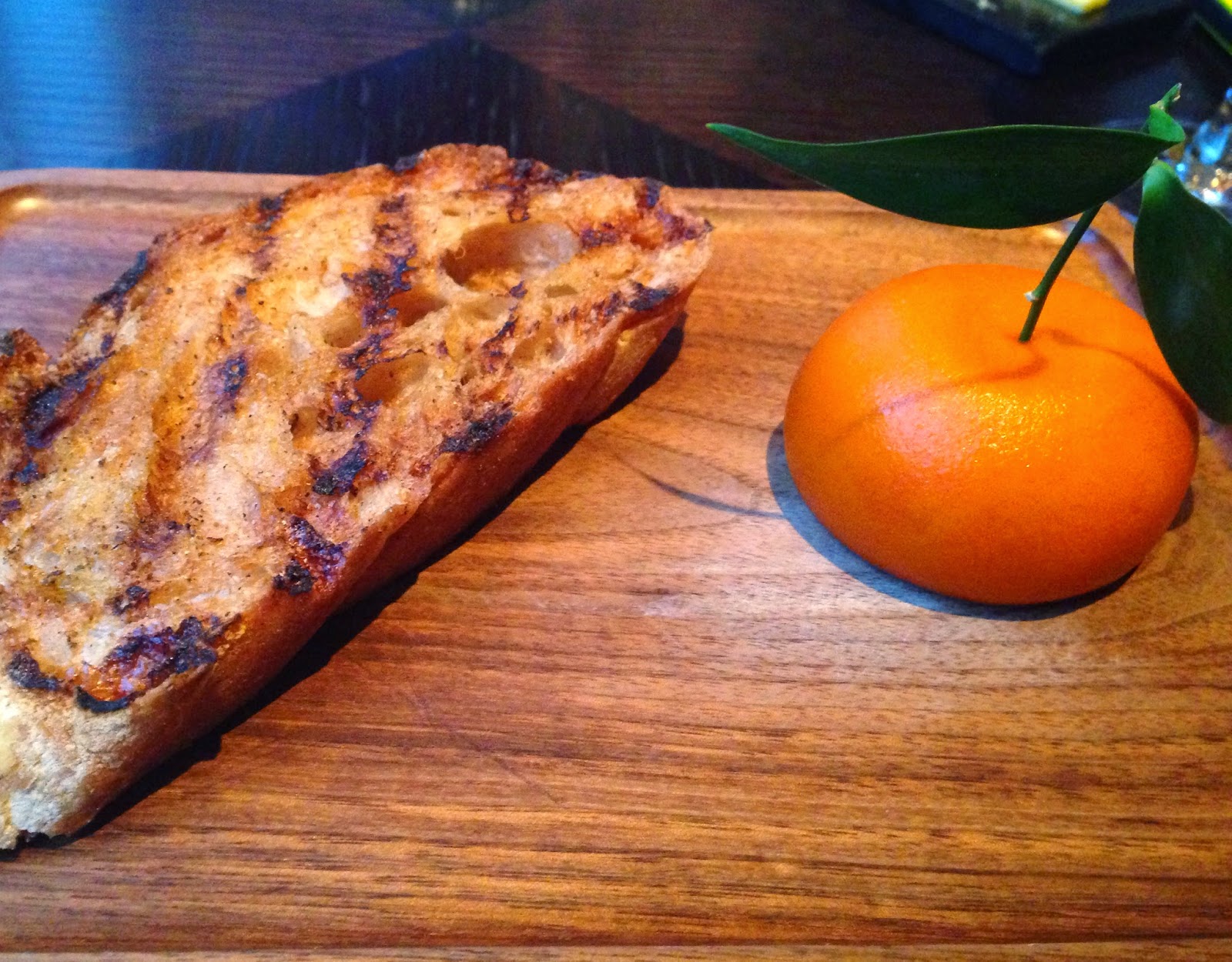 As a restaurant named one of the top 10 restaurants in the world, as well as having a celebrity chef renowned for this quirky inventions and scientific experiments with food, I was so looking forward to Dinner. It’s actually easier to book than you think, and with some three or four months of advance planning (for the OCD like me), some furious mouse action, and the help of Opentable, you can get an 8pm Saturday reservation. 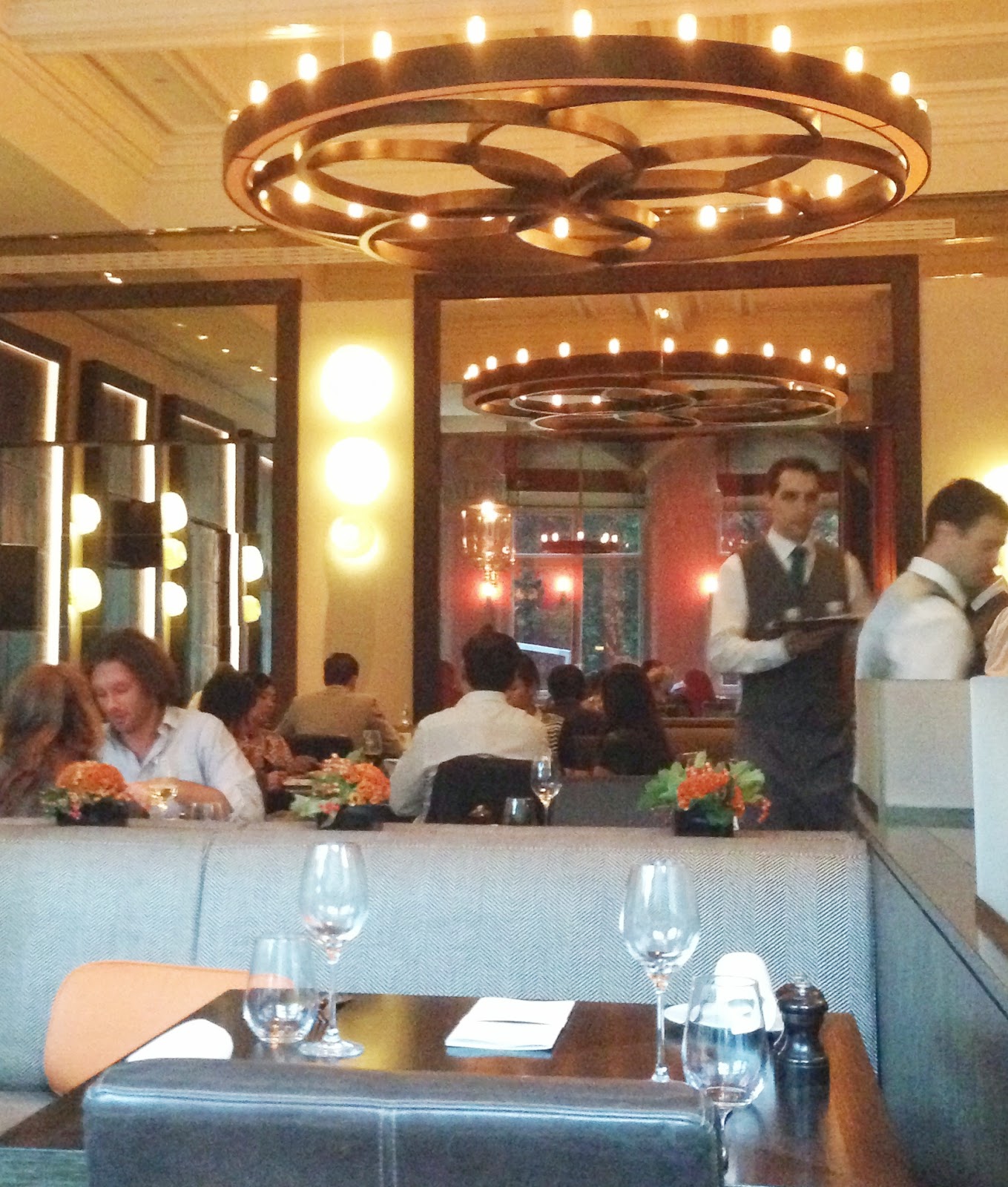 So off we went, to have dinner at Dinner, for my boyfriend’s birthday :) The restaurant is in the Mandarin Oriental, which needs no introduction, as a porter greets you can points you in the right direction of Dinner. Arriving at our table, we were presented with the menu, which was wrapped with a piece of card that had some food trivia on it. The whole concept of Dinner is that it takes dishes eaten at different points in British history, with a slight modern twist. 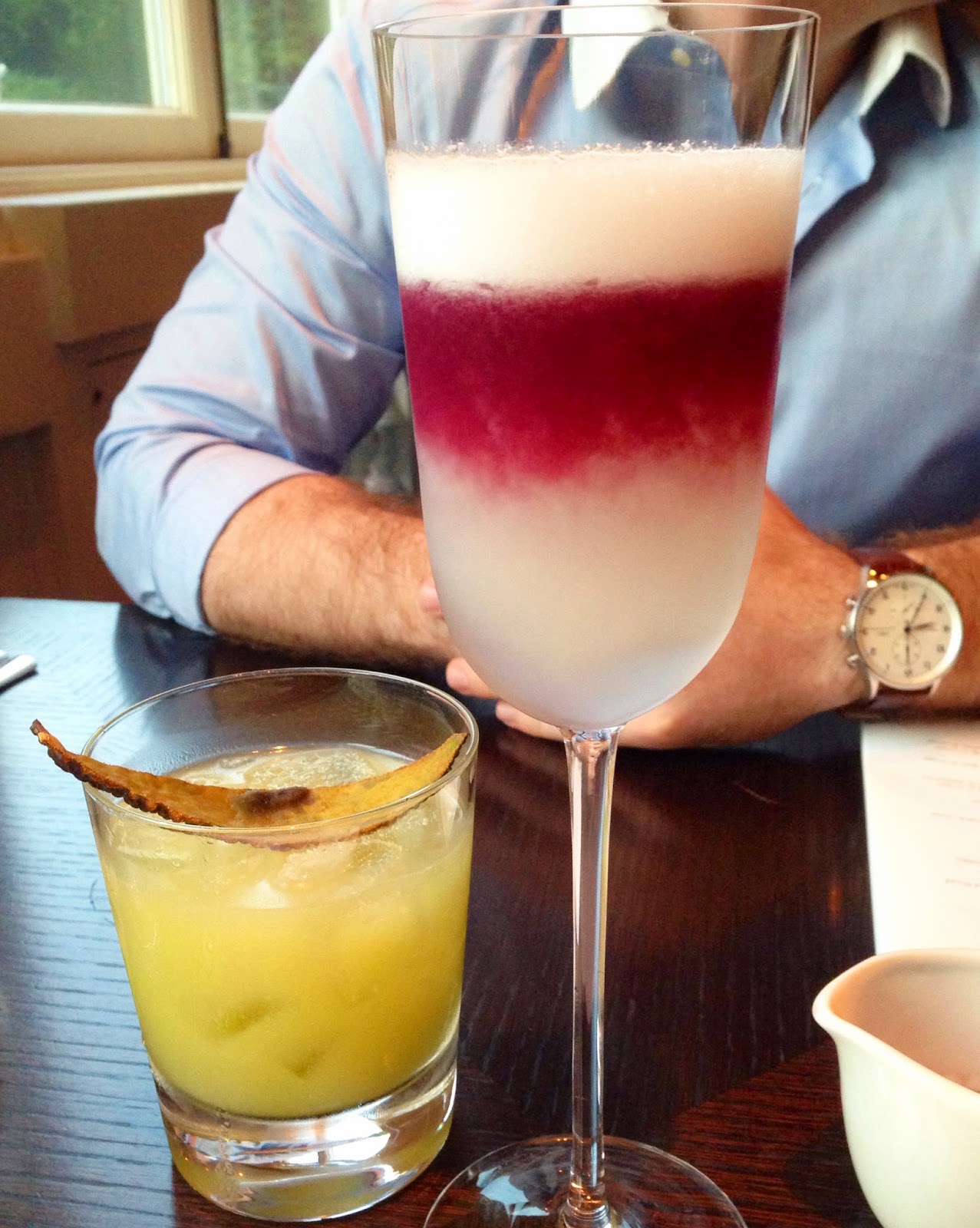 Feeling fancy, we ordered some cocktails. I’m actually struggling to remember what was exactly in mine, but it had sake and (I think…) pomegranate and lychee and it was deeelicious. My boyfriend had something which was, um, yellow. With a piece of avocado skin. It was nice! 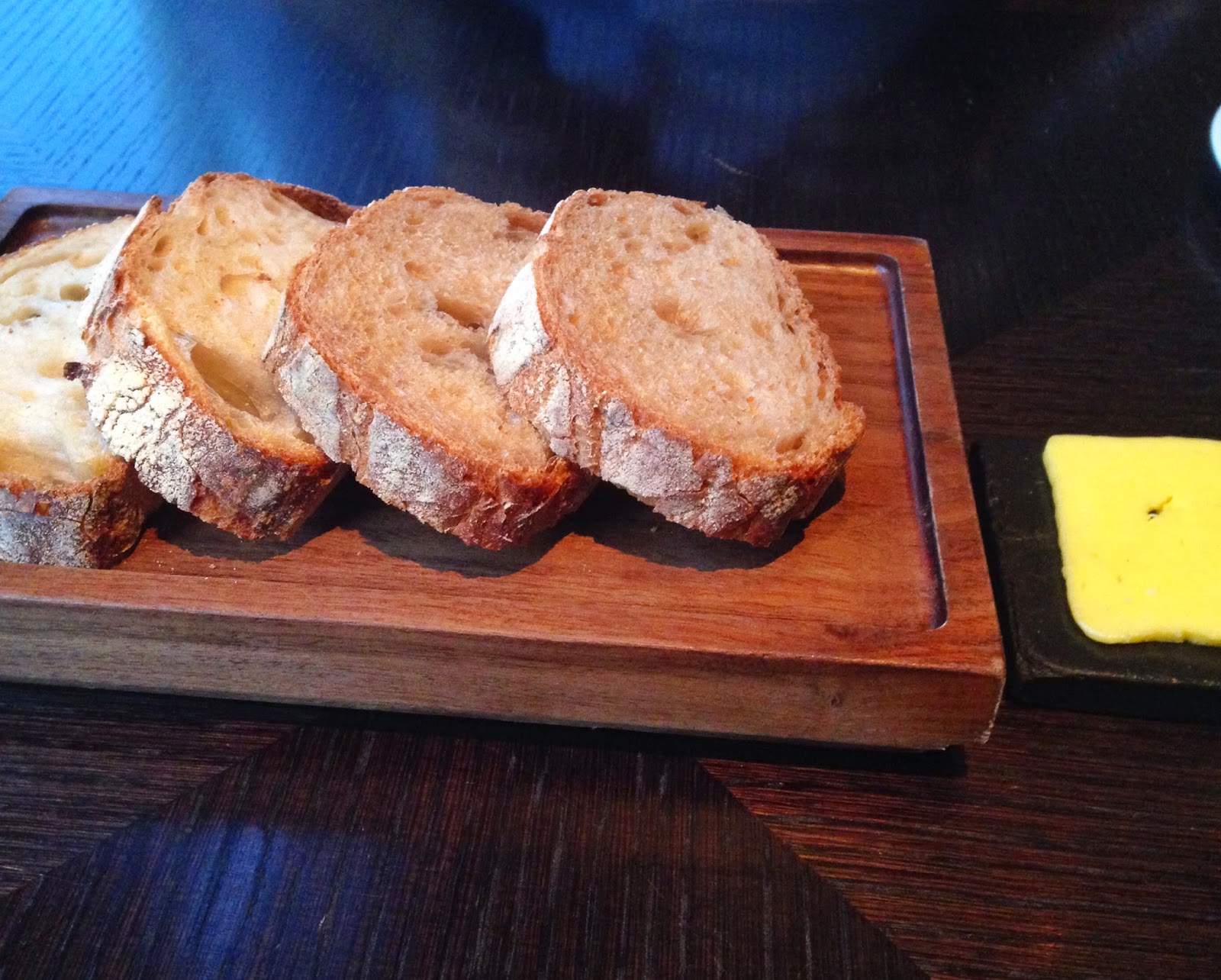 I must admit, the bread was slightly disappointing. It was great ciabatta (at least I think it was ciabatta), but it wasn’t too soft and was very much like the ones you get at the artisan bread stalls in Borough Market. But we were starving, so chomped down on the carbs (later discovering that this was the most basic schoolboy error). 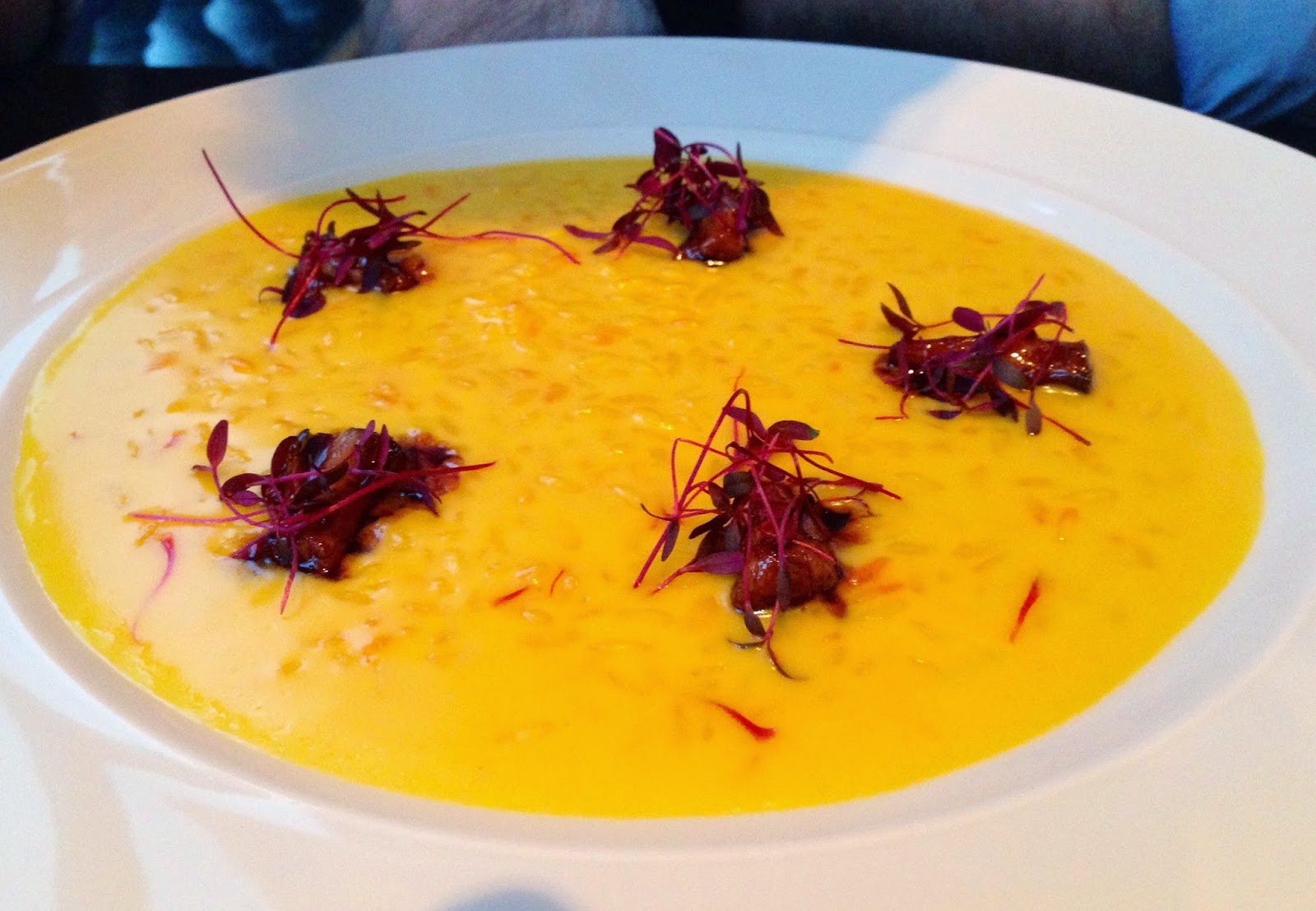 He ordered the Rice & Flesh (saffron, calf tail, red wine) to start, and I went straight for the famous Meat Fruit. Spoiler alert! It’s not actually fruit. It’s a splodge of the most incredible chicken liver foie gras parfait, with a layer of mandarin jelly outside. Aaaaah. When I finished my piece of bread, the waiter came over and asked if I would like another one. Yes please! Scurrying away and returning a few minutes later, I received my second piece of grilled bread, on its own little plate, and carefully placed by my starter. It wasn’t until a few minutes later I realised that a waiter had put a whole lot of much effort into delivering, to me, what is essentially a slice of toast. Nice. 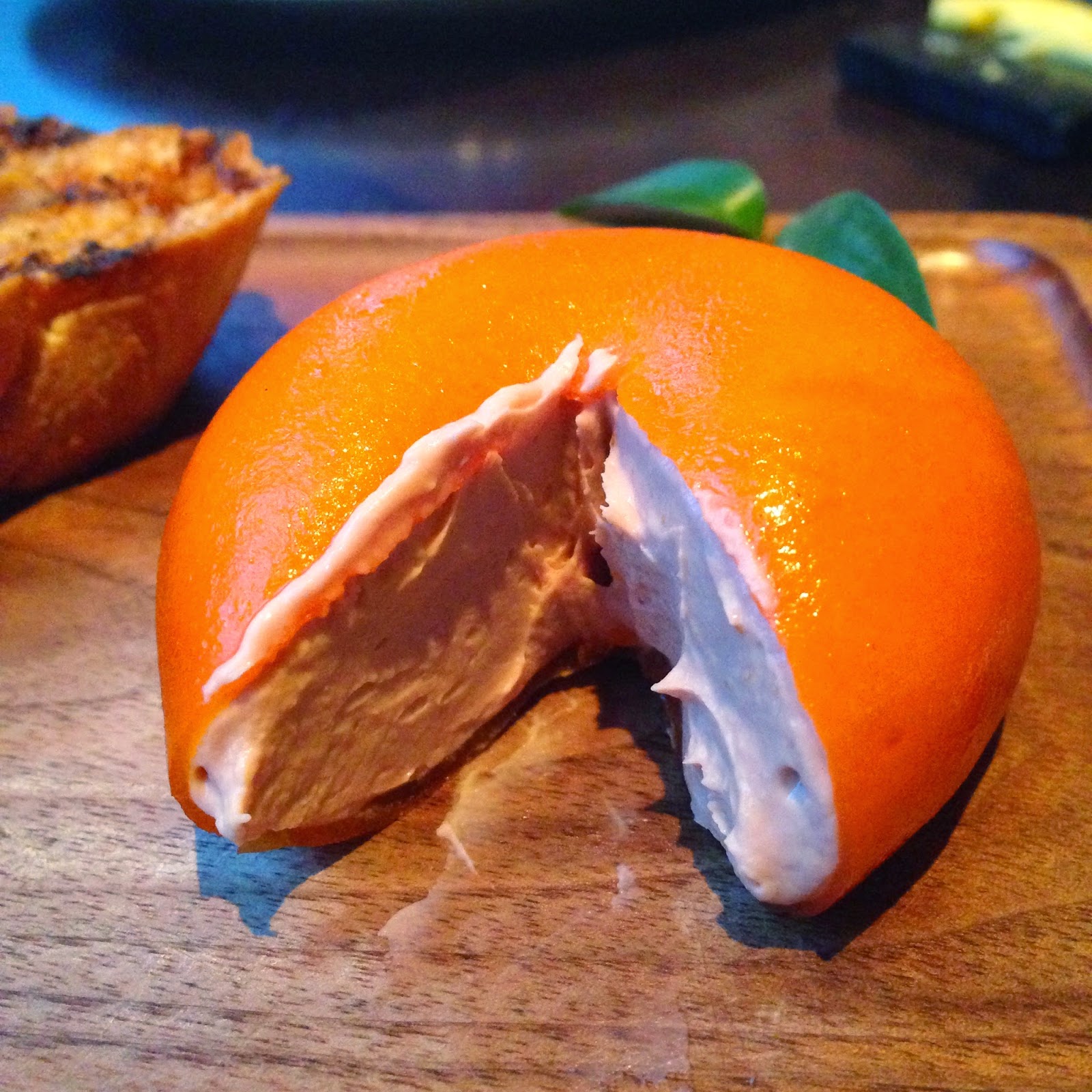 On to the mains, he had the powdered duck breast, with smoked confit fennel and umbles. I had spiced pigeon, with ale and artichokes. We both ordered a glass of red (I don’t remember the specifics) SO, SO juicy (the food, not the wine, I mean). And, let’s be honest, neither me nor you know what umbles is, but who cares when it clearly tasted AMAZING. That perfect medium rare soft melt in the mouth meat with skin on juices that just oozes through…. 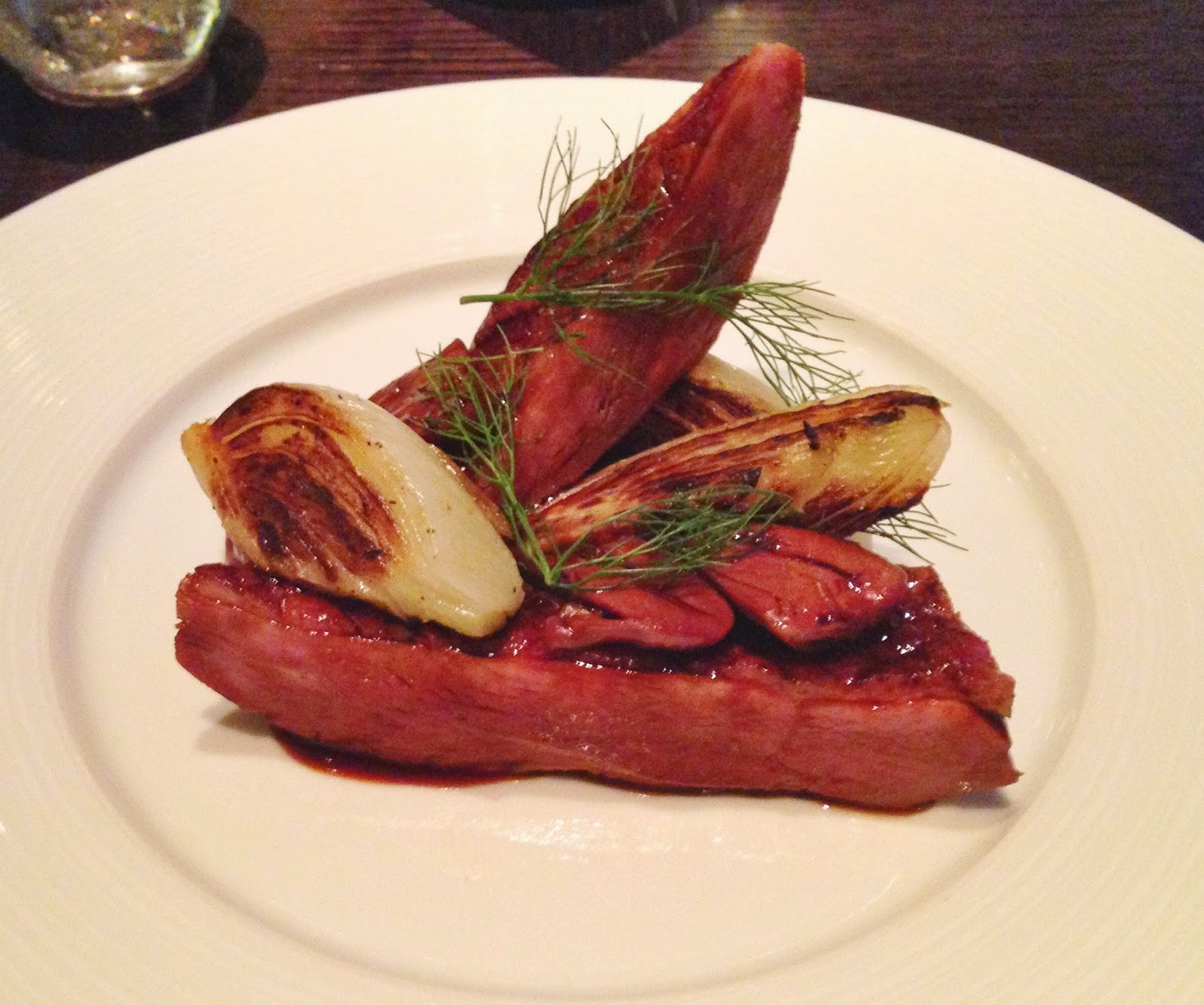 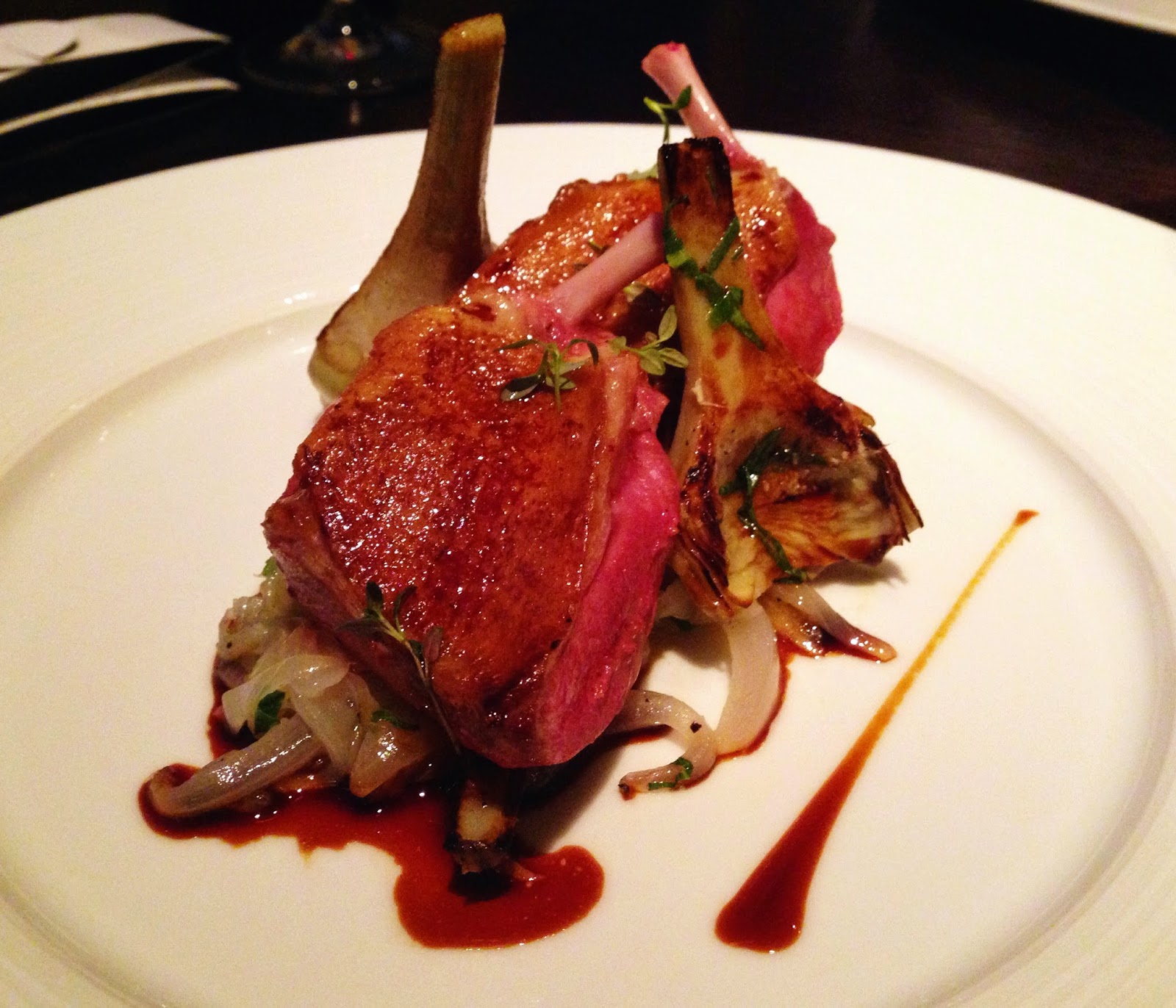 I may have been drooling on to my dish at this point, I’m not sure, but either way our waiter cleared away our plates (I would have totally licked my plate if it wasn’t so frowned upon in such establishments… and maybe society in general) and brought the dessert menu. 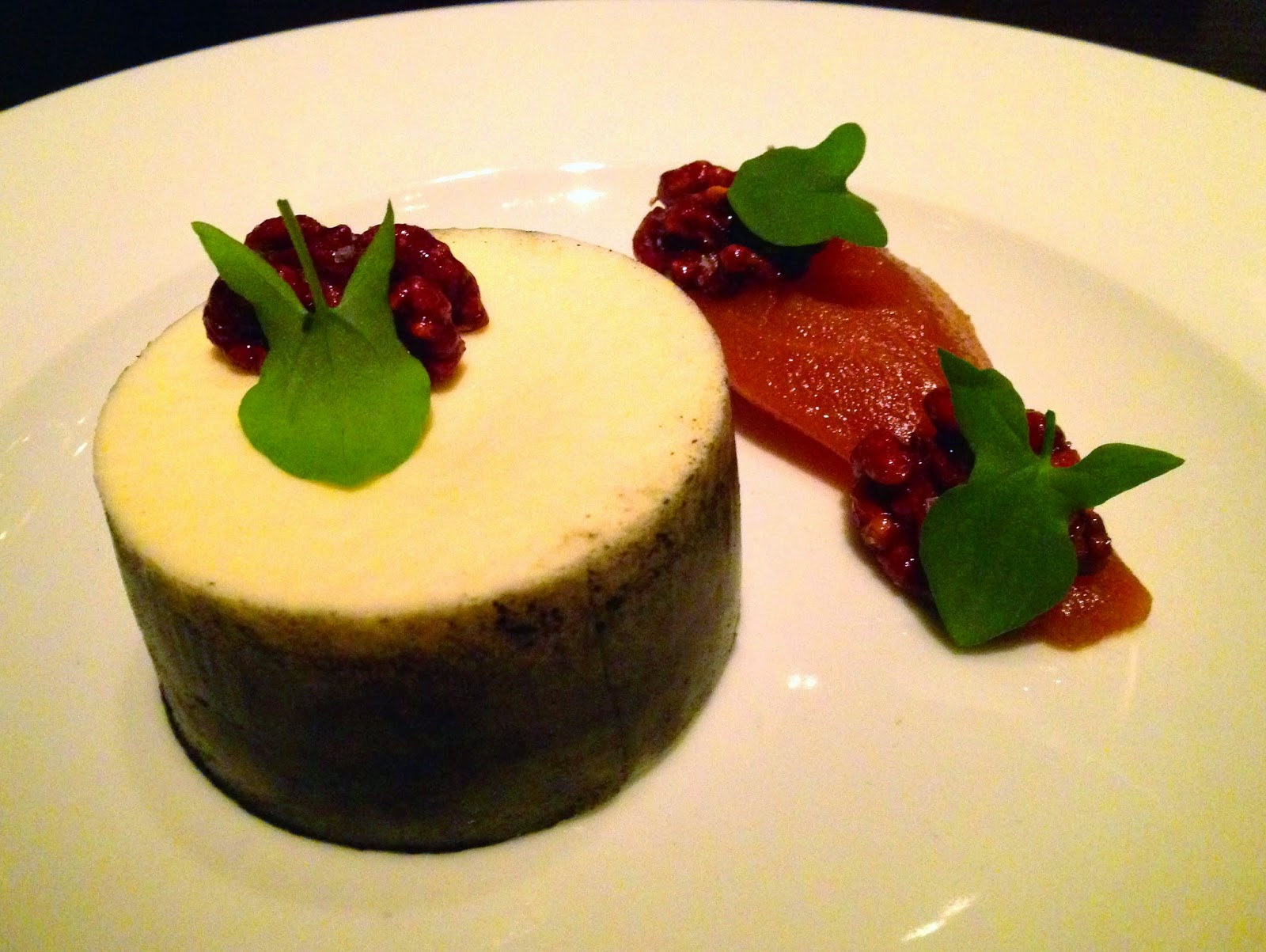 We went for the tipsy cake, a kind of spit roast pineapple served with warm glazed brioche bread  and the sambocade. What’s sambocade, you ask? Oh don’t you know? It’s only  goats milk cheesecake, elderflower & apple, roast figs & smoked candied walnuts. All the rage in the 14th century (according to the menu).
To be honest, we were quite stuffed at this point, but….. you know, it would be rude not to, right? 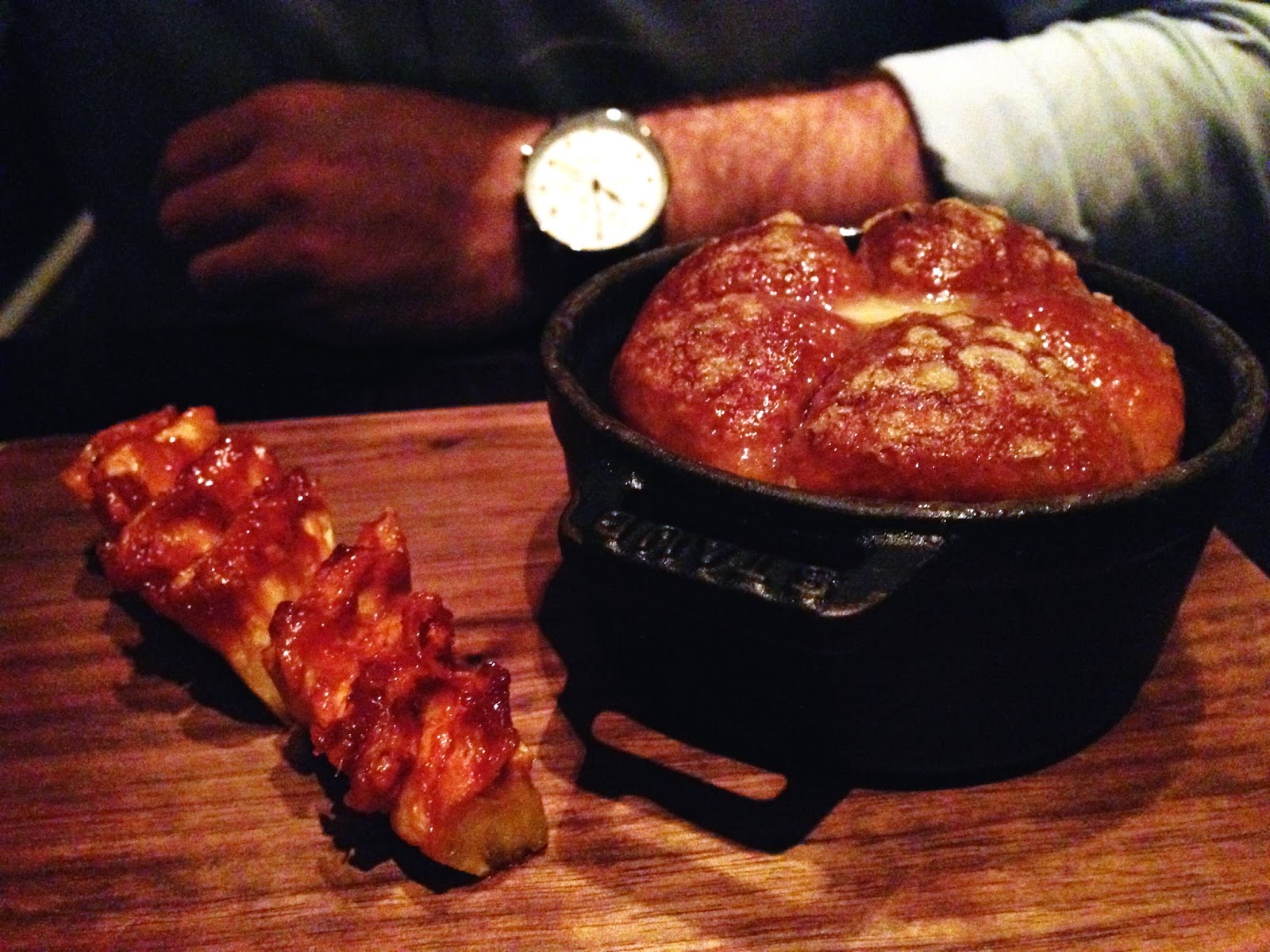 After that came the birthday chocolate pot with basil scented crispbread. And we spent aggeesss eating it, to help us sort of allot time to digest the rest of our dinner. 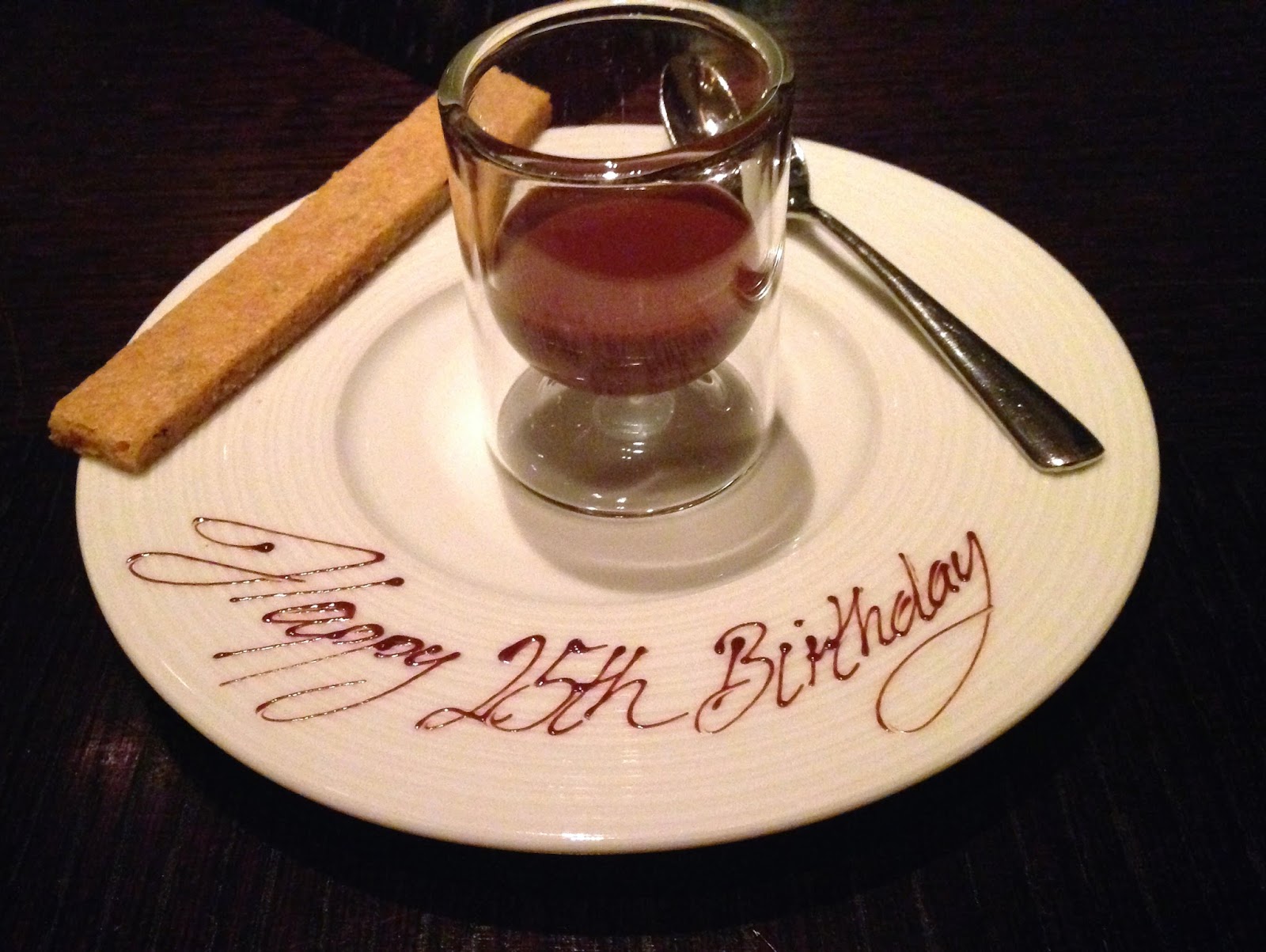 The service, needless to say, was impeccable. They are incredibly attentive despite a full service, with guests arriving at 10pm, and very professional. But I guess the sort of things you’d expect from a 2 Michelin star kind of place, right?

Email ThisBlogThis!Share to TwitterShare to FacebookShare to Pinterest
Labels: reviews