Xin Nian Kuai Le, Gong Xi Fa Cai! Today we begin the year of the rabbit. May lots of luck and happiness and fortune hop your way! In China at the moment everything is a blur; its that time of year where phone lines get jammed and train prices cost a gazillion yuan and everyone eats until they want to pop and then sit down around the tv to watch the Chinese New Year Gala.
And whilst I've got your attention, this is my all time favourite performance of the galas - the deaf troupe's Thousand Hand Buddha's performance.
I do miss being in China around this time of year, as I have never spent Chinese New Year in actual China, but that’s fine, because I celebrated with some Chinese friends at Uni yesterday. We made dumplings, and as they say: Luck is like having a dumpling fly into your mouth.
Although we didn't having any flying dumplings, a group of my Chinese friends got together last night and made dumplings, and I made fortune cookies. Fortune cookies? Yes, the ones they give you at the end of a chicken chow mein meal in restaurants in Chinatown that say stuff like: 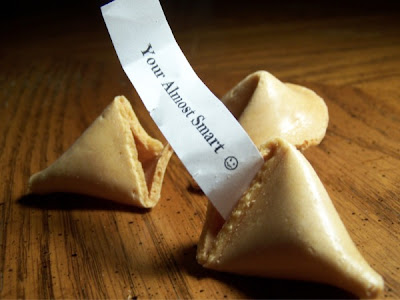 I made my own fortunes for mine, some were nice (most were nice!), some were prophecies (um, mostly nice ones!), some were IOU (i.e. me) drinks, which I hoped wasn't the one I'd end up choosing.
But whilst I was making these, my friends had set up a nice little production line churning out dumplings like there was no tomorrow, and I think that we did a pretty good job! 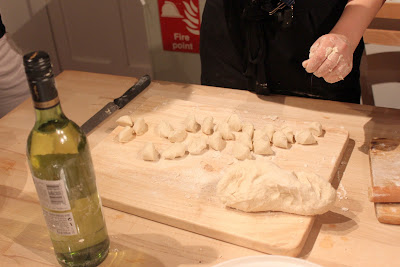 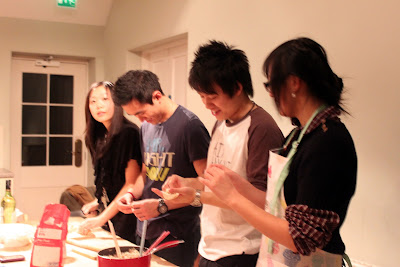 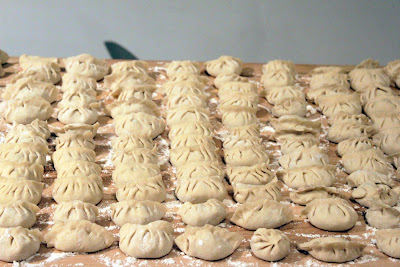 This makes me happy. THIS is what the new year is about! 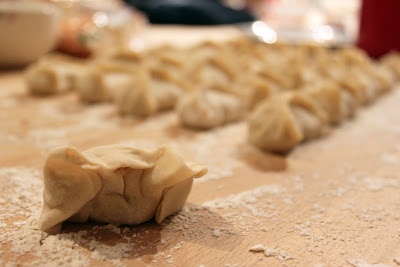 The um, rejected one. I won't er, name and shame the person who made this. 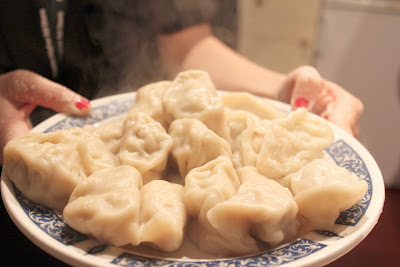 Hao le! The finished product. If you are lucky enough to have any leftover in the morning/clever enough to have frozen the uncooked dumplings, you can make Gyoza (or You Za, but this probably doesn't mean anything to you, for all you know I could be saying anything from cheese braised dumplings - now that's something to try - to a bit vat of excrement) fried dumplings.
And then comes the fortune cookies. I'm not sure why I suddenly decided to make them, because you have to fold a message inside them whilst they're still hot so that you can fold the cookie over into the half moon shape, meaning you can only make about two at a time, or it cools too quickly. 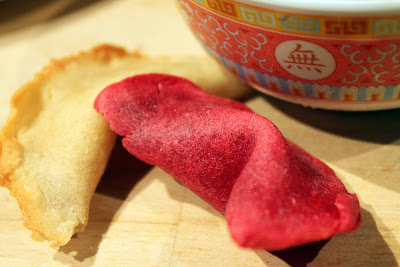 I started off making the batter, and added lots of red food colouring because a) I had loads left over and b) I felt patriotic. 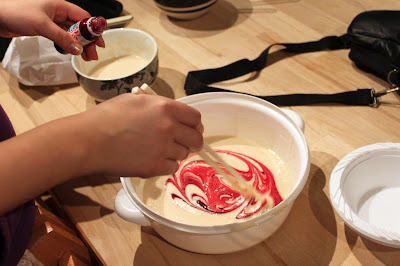 Finally after I got bored of oohing and aahing over the pretty swirly pattern, I made round shapes on a baking dish, but... 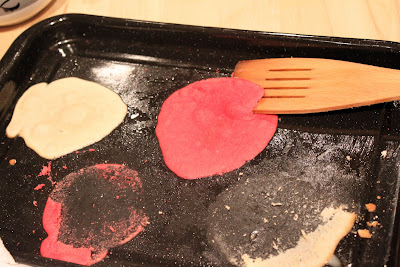 It kind of stuck :( So then I used foil to line the tin instead, which worked out better. It didn't however, stop the cookies from forming small bubbles in the oven, and I had no idea why this was. But it didn't matter, it's the thought that counts anyway. And besides this, I still managed to burn my hands every time I took a cookie out of the oven and started folding it, because I didn't have the sense to use an oven glove. Clearly my fortune should have been: a little bit older, a little bit rounder, but none the wiser. 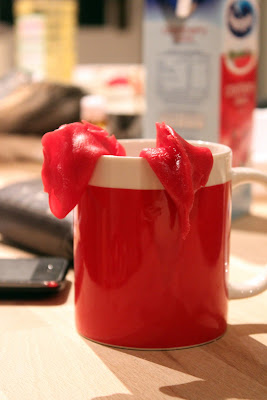 But anyway, they were made, the dumplings were cooked, and we were fed. We also had fish, a symbol of luck and wealth (I think? That's what it always seems to be with Chinese symbolisation), and then we really *should* have sat round the table and played cards and eaten sunflower seeds. But I went to watch The Black Swan instead. Shame.
A good night had by all!
Lesson learned today: WEAR OVEN GLOVES WHEN TAKING THINGS OUT OF THE OVEN. It should be obvious but I was clearly disorientated from the delicious dumpling soup smell.
Posted by Xinmei @ Pudding Pie Lane at 16:16