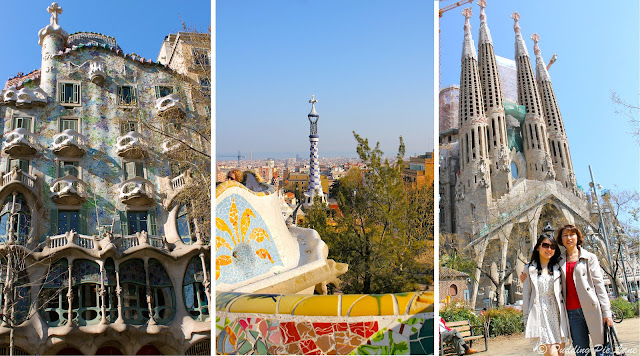 So I've just finished my penultimate term of University! I've done my last ever dance society's annual show, I've handed in my dissertation (sadly only a draft), I'm home for the last ever Easter holiday before I enter The Real World.

I must warn you, however, that my brain has been turned into frazzled mush from last term at uni. Most days, anything that goes in one ear comes out the other as"blah blah blah Economics mumble mumble supply and demand yada yada yada profit and loss! ZzzzZzzz", therefore I apologise if this post is a bit all over the place.

So, last week I went to Barcelona with my parents. I'm not sure why. I really should have been revising instead. Hm.

The food was good though =) 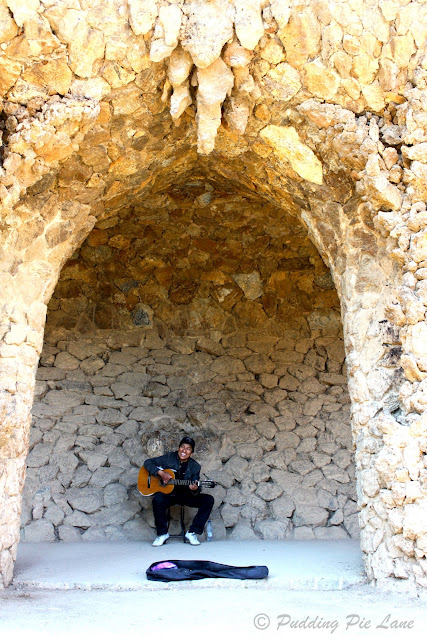 A man (a busker man?) playing the guitar in the Park Güell.

I must also warn you that this is a very very photo heavy post. We had three cameras between us and my dad and I went a teeny bit camera happy. The result is over 1000 photos to upload and a lot of time spent waiting for iPhoto to reboot. But said photos are pretty, so I'm sharing them with you =)

Not only was the food great, Barcelona has some of the most wonderful architecture I've ever seen. That's mostly down to Antoni Gaudí's, so he is now my new favourite person of the month (I'm sure I'll find a new obsession next month, my attention span doesn't last that long).

There's the Casa Batlló (first photo, far left), which I've dedicated a separate photo collage to (below) because it's literally like living in something out of Alice in Wonderland, and I love it. The middle photo is in the Park Güell, and the last photo is the Sagrada Familia(which began construction in 1882 and is due for completion somewhere around 2025...). 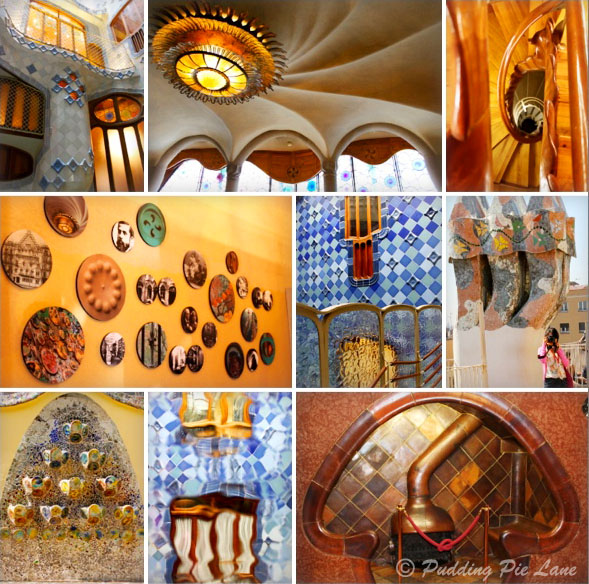 The middle inside-out staircase of the Casa Batlló, the first floor, stairs, roof, chimneys (not necessarily in that order).

We went to pretty much all of the top ten attractions (according to Wikipedia, anyway). Well, all except the football stadium that FC Barcelona use. Football is boring :p

Now, this is usually the point where I drone on and on, but I'll try my best to let the photos do the talking instead! Anyway, seeing that photos speak a thousand words, it's probably a good thing that I'm not talking. You'd deserve a medal if you made it to the end of this post.

Instead, I'll summarise the main things I learnt/saw in a handy list of bullet points (accompanied by photos). So sit back, relax, and enjoy the collages!
(And stop thinking about football. You know who you are =p)

1. Visit the food market ("la Boqueria" - my highlight of the trip!) on the La Rambla (one of the main touristy streets). I really recommend the food stalls in there, they have huuggee watermelon/pineapple/melon slices going for €1 and freshly cut Iberian ham to try (and buy!). Try some freshly cooked seafood in a stall at the back of the market. I got a plate of yumminess for €25 at 'Barcentral' (stall 494-496), and it was worth every cent (plus a bit more).

(If you are squeamish, beware! The butchers aren't shy about the cuts of meats that they sell. I'm talking heads, eyeballs, the whole works. See for yourself below.) 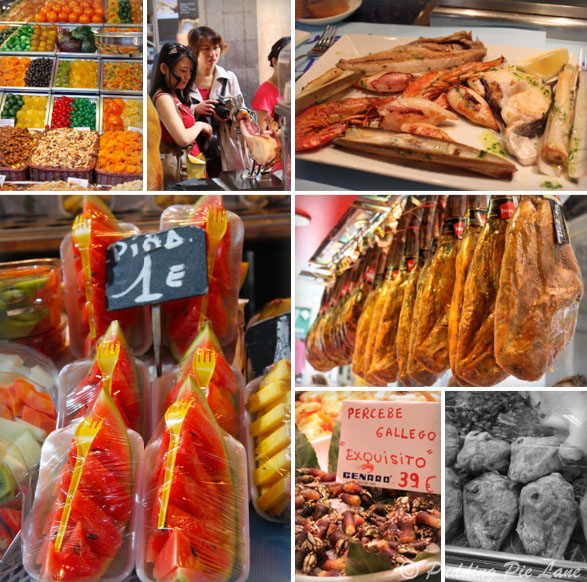 Oh, and if anyone can tell me what these 'exquisite' things are, I'd be really grateful! They looked like claws. Tiny ugly claws... I really hope they're not.

2. Try not to go during the day of Spanish general strike. I did, however, get a pretty good view from the top of the Casa Milà (another Gaudí building), but also on the way back to the hotel got pretty close to a couple of bins that the strikers set on fire. Kept me warm, I guess, but never again! 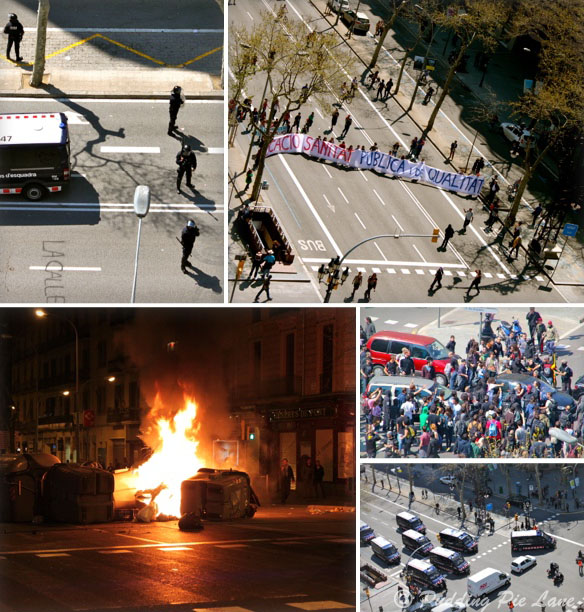 3. Eat all the different types of tapas you can find! But figure out the way to order them first. You're supposed to go up to the bar and order there and or grab a plate and help yourself. Sometimes, the tapas are served on toothpicks and you keep your toothpicks so the waiter knows how much you ate at the end of your meal. If you sit at your table and wait for them to take your tapas order, you'll be waiting a lonngggg time. 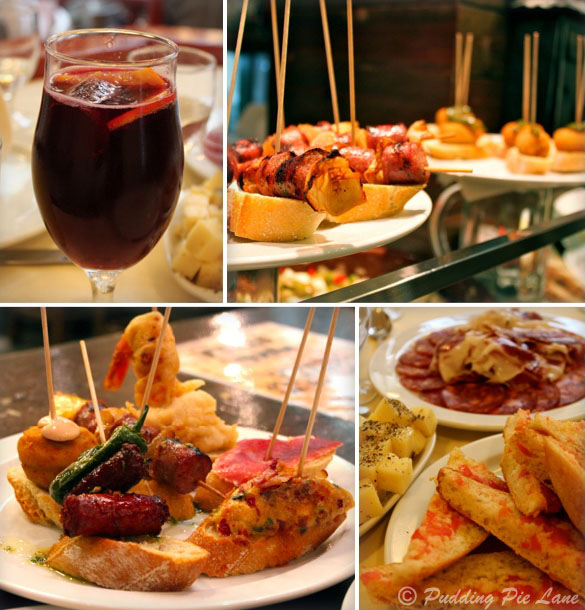 What was funny was that at one of the restaurants I asked for a glass of sangria. When it arrived, my dad suddenly had a revelation.

"Xinmeeeiii!! You can't drink that! There's alcohol in there. Let me have it."

I know I'm small and a girl and Asian and therefore lack the alcohol breaking down enzyme, but I am turning 21 this summer. Nevertheless, I was allowed a tiny glass. But you know what, I really think it was just a ploy because my dad had already ordered pineapple juice before realising that wine was in fact included in our set meal. Ha. 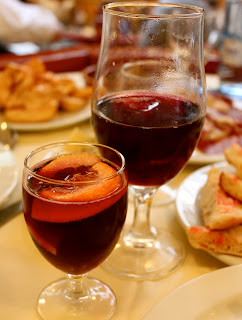 5. I've also learnt now that I'm not very good at keeping to what I said. I said I'd let the photos do the talking. I promise I will do from now on! 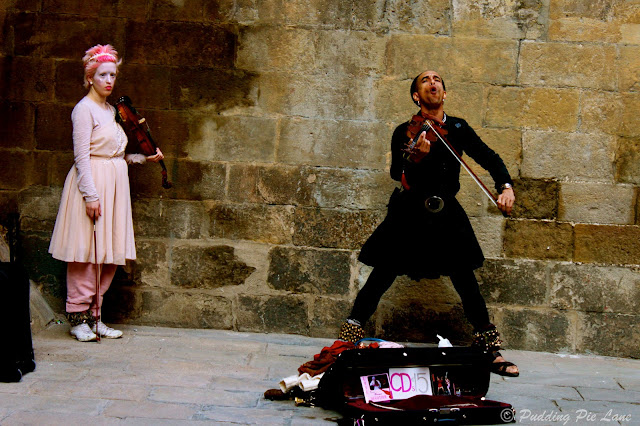 Totally getting into the grove, Miss Grumpy on the left not keen on joining in 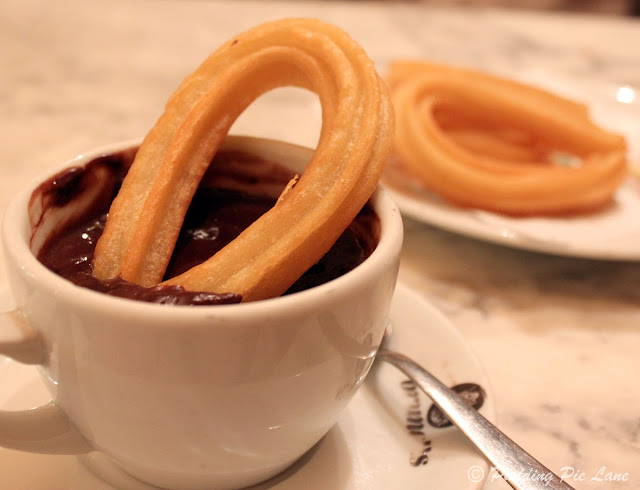 Chocolate con churros (€4.50) at Brunell's Bakery (, near the Picasso museum. People rave about this place but I could have sworn they made my hot chocolate from that powdered stuff... 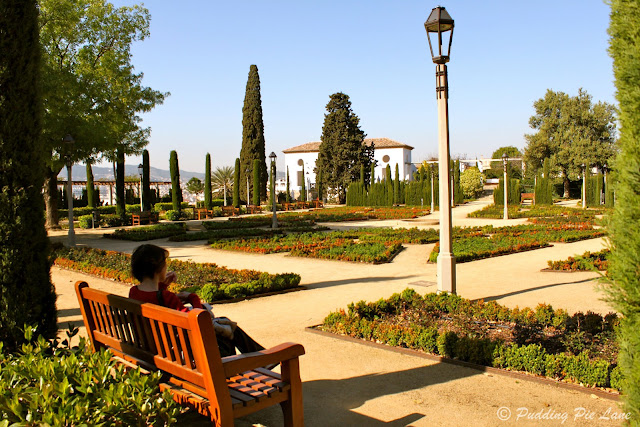 The gardens in Montjuïc. Well worth a visit! (And also the Spanish village near it)... 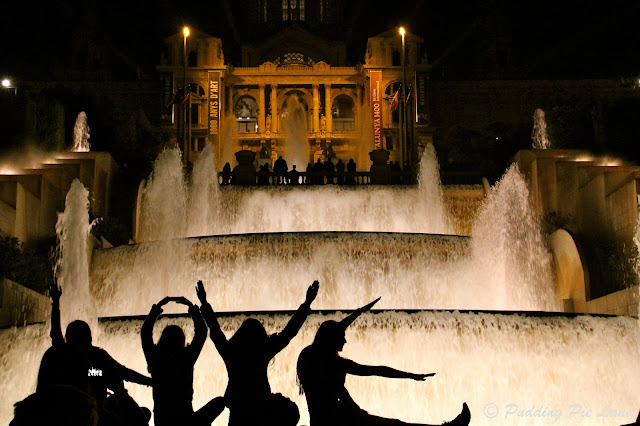 And also the magic fountains whilst you're at it... 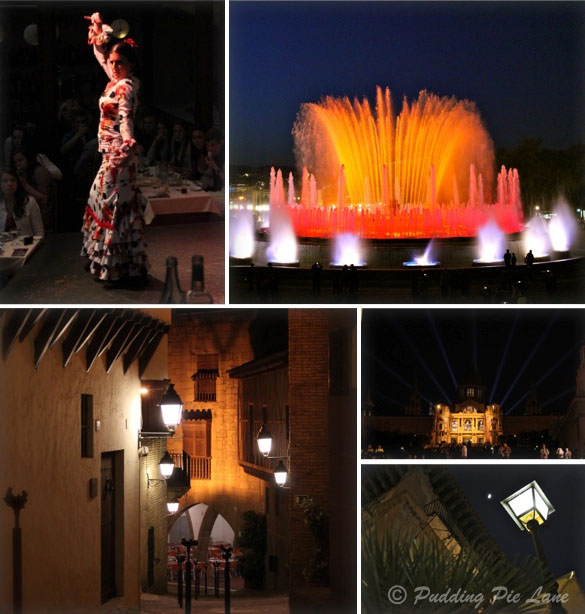 And with this, I think it's time to call it a day!

I hope you enjoyed the photos :)

I've got some posts planned soon, which will hopefully finally include a video blog (that I've been planning to do for a year now...) and reviews of all the Cambridge College formals. An Easter recipe to come if I'm organised enough too!

p.s. whilst you're in Barcelona, why not visit the Chocolate museum? It's only €3-4 entrance and your ticket is a chocolate bar! Chocotastic :D (Museu de la Xocolata, C/. Comerc, 36, 08033 Barcelona, Spain)
Posted by Xinmei @ Pudding Pie Lane at 01:11