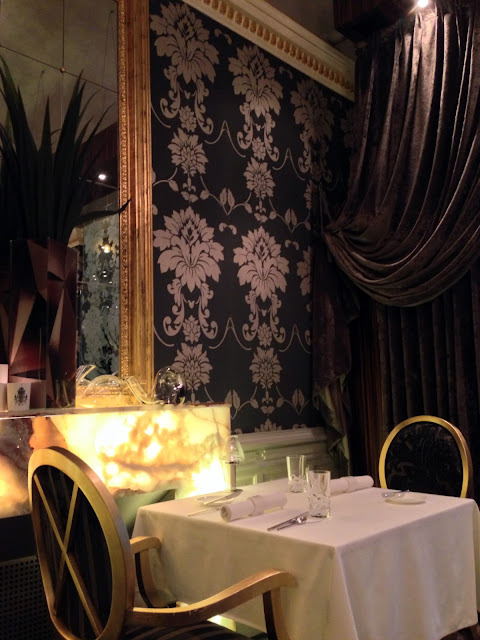 Continuing on from my Budapest post, my friend and I decided to foray into out first overseas Michelin star restaurant at Onyx, in the centre of the city. Onyx is one of the two Michelin restaurants in Budapest and we choose this one as it looked more, well, funky. Funky is good.

There was a LOT of food. So I'm just going to jump straight into the photos :D 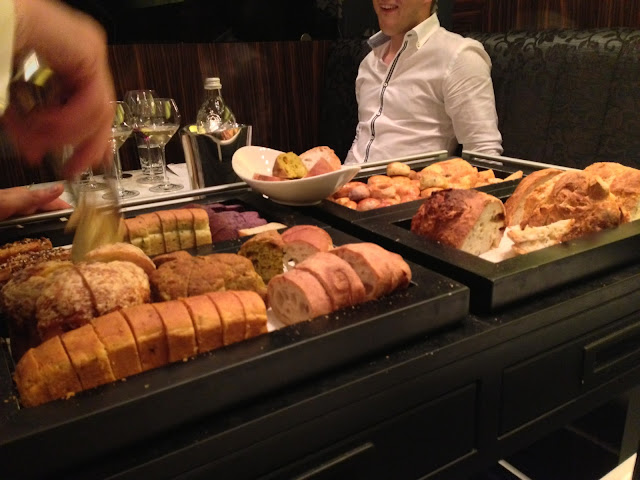 There were two tasting menus to choose from, one 6 course Hungarian inspired menu and another 10 course tasting menu. We decided to go for the 10 course menu as there wasn't much difference in the price. Does anyone feel like when you're using foreign currency its like you're using monopoly money and whatever you spent doesn't count?

We stuck to this argument, as it made us feel better. 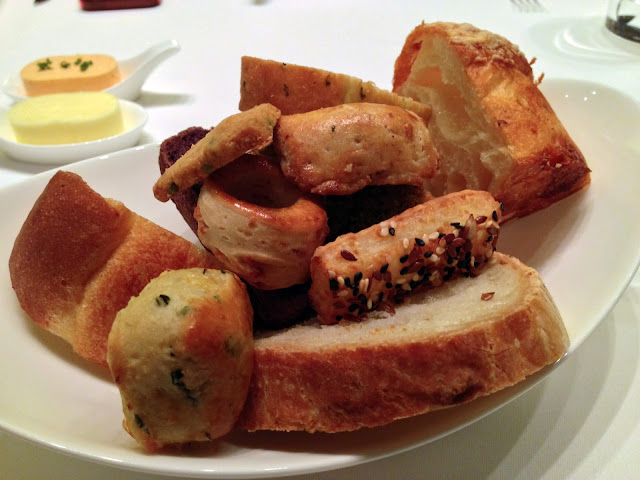 First off before the menu kicked off was the bread. This was a lot of bread for two girls. I really didn't want to fill myself up before we'd even started the starters, but damn it was good. 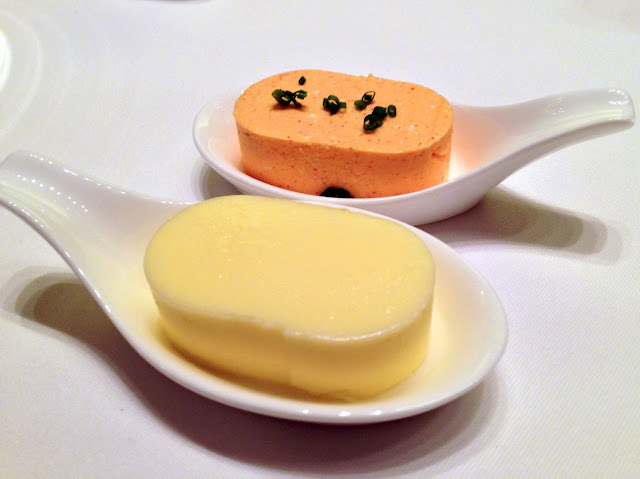 There were cheesey ones, purplely yam ones, seeded ones, herby ones, served with butter and some orange moussey affair. 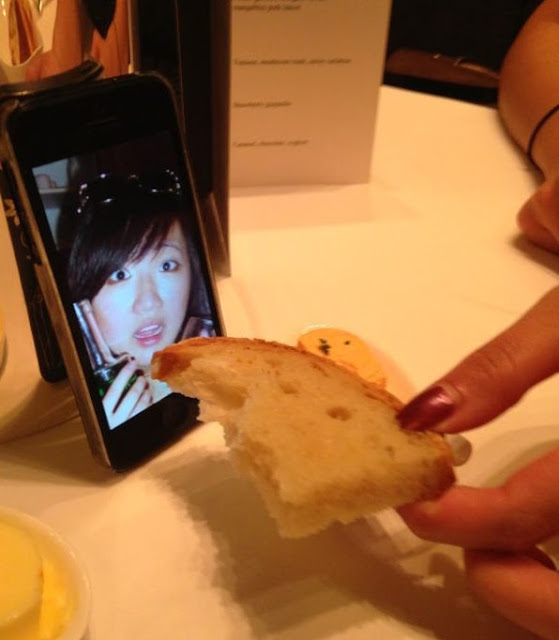 So, there is a story behind this photo!

Originally, there was supposed to be three of us going on holiday together, but sadly one of our friends had to pull out last minute. So to make sure she didn't miss out, we were going to photoshop her into our photo together. Then, I had a better idea. I'd just get a photo of her on my phone and prop it next to me so she can be here in spirit! We even found a perfect eating face photo to feed some bread. Yes, we were feeding bread to an iPhone and taking photos of this... in a Michelin restaurant.

I turned round and the waiters were pissing themselves laughing at us. 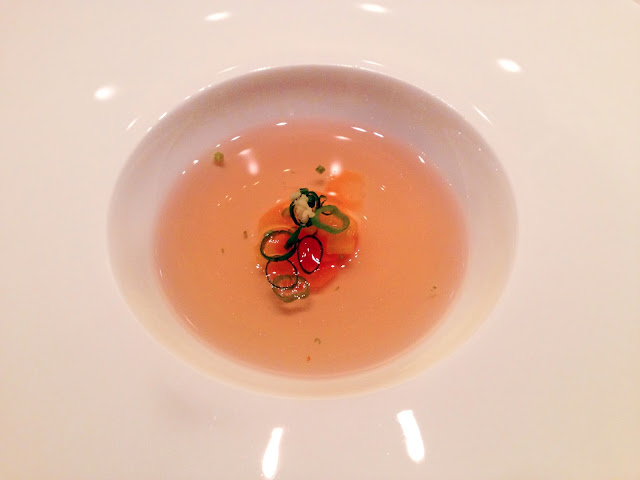 This was the aperitif ('compliments of the chef') before the menu has started (we anticipated a night of food babies ahead) - gazpacho. It was teeny tiny. But very good and refreshing. 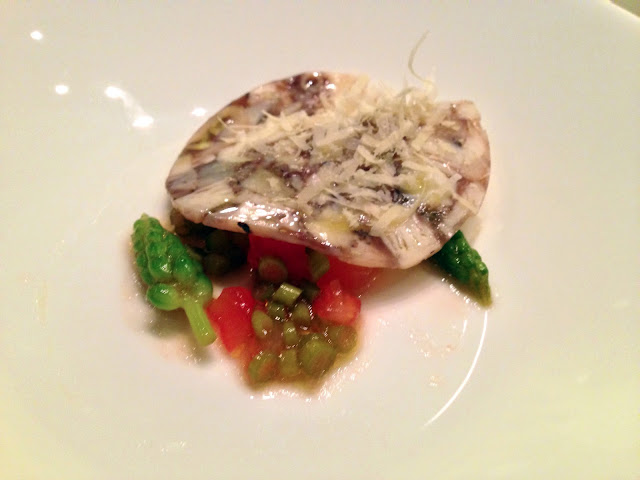 Octopus carpaccio. I'd never had octopus served this way before (but to be honest I'm not a frequent octopus eater). I don't think the cheese on top did any wonders for the dish but otherwise lovely. 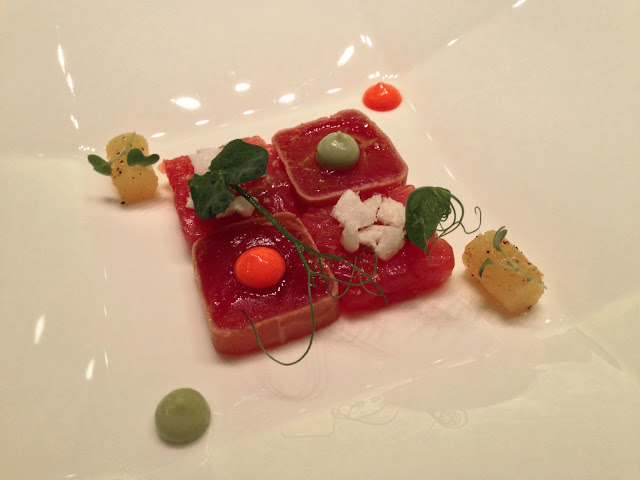 Marinated tuna, pineapple and avocado. Best tuna ever. See that white stuff on top of two of the tuna pieces? That was a crushed up prawn cracker. Bit strange really. 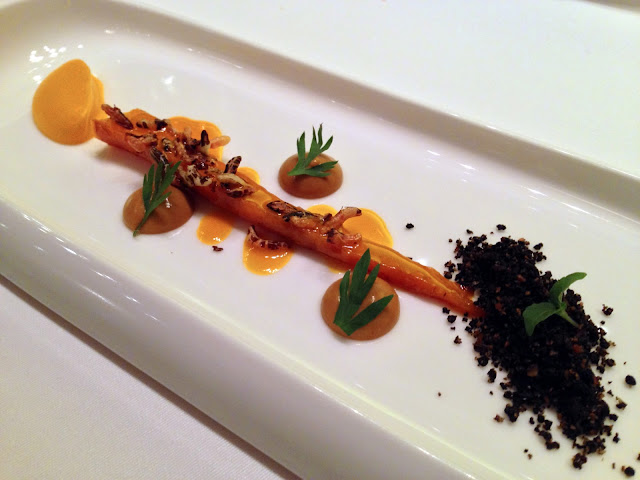 Spring roasted carrot with veal sauce. I'm not really sure how you make veal sauce as such but it was nice. The black crispy stuff (technical term) at the end of the carrot was really good! Couldn't figure out what it was though... 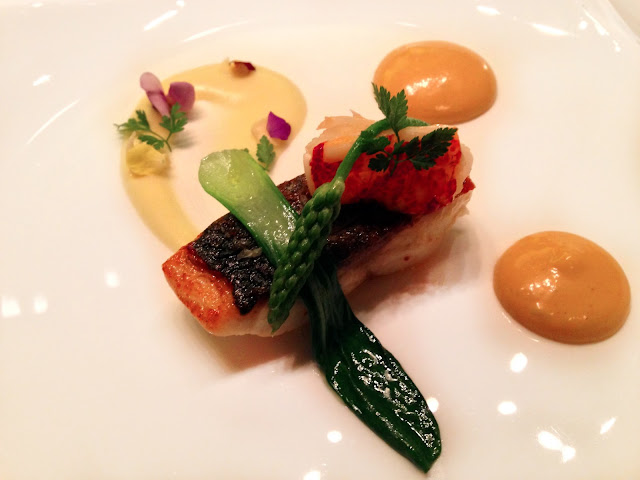 Wild-caught sea bass, lobster, smoked potato puree, sabayon. I thought that sabayon was a type of biscuit but it turns out that its a moussey type sauce, probably those blobs in the corner! Not my best ever fish, I didn't think the fish was tender enough but the crispy skin on top was yum yum. Although probably not good for my tum tum (in the waistline sense!). 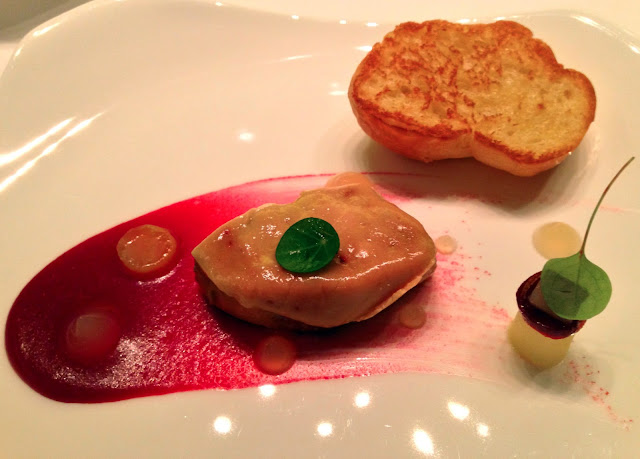 Roasted duck liver, beetroot, green apple. I have a new found obsession for liver. It was very fatty and a slightly snotty like texture (I'm not selling this very well) but in a good way! I thought the buttered brioche it was served with made the dish a bit too rich but hey ho I was happy with that chunk of liver. Maybe my body is subconsciously trying to replace all that liver of mine I'm so good at destroying. Sssshhh..... 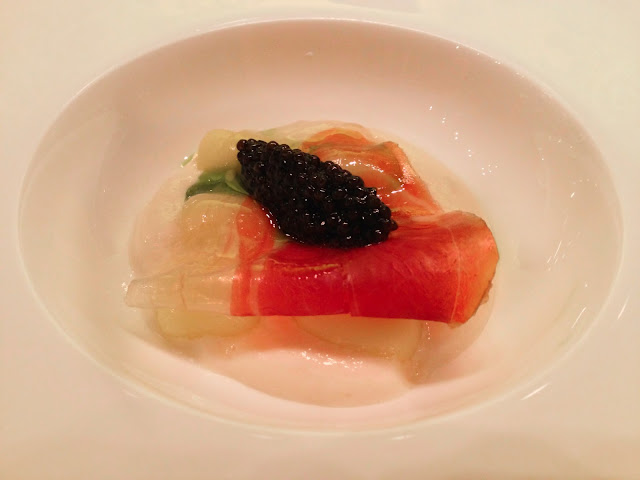 Potato gnocchi, sturgeon caviar, mangalitza pork bacon. What's mangalitza you ask? But, surely everyone knows what mangalitza is? Why, its only the name for the three breeds of pig bred in Hungary otherwise known as a curly hair dog! 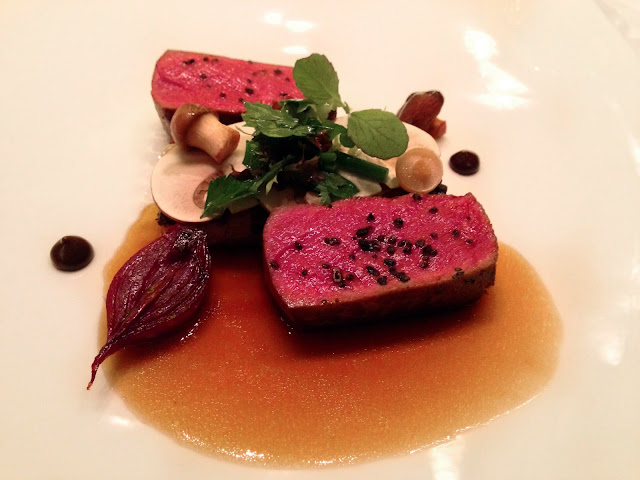 Venison, mushroom toast, onion variation. Okay, so by this point we were prettttty full. To be honest, I think we were full after the carrot course.

I blame the bread.

And 'onion variation'? Not to say this course wasn't nice (although I had lost a few of my tastbuds from the sheer amount of food I had consumed that night), but what is 'onion variation'? Is it a variety of onions served on the plate? Didn't seem like it. Is it an onion that isn't quite an onion and masquerading pretending to be an onion? 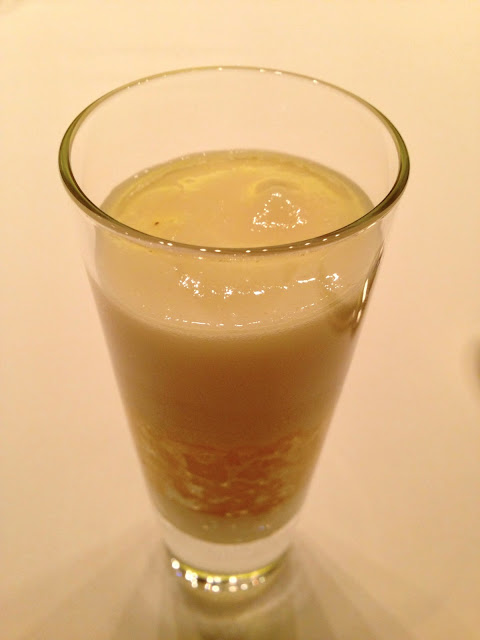 Pre-dessert (not on the menu!). Yes, there was a pre-dessert! What course were we on now? I think I've run out of fingers. This was some pineappley moussey affair served in a tall shot glass and my friend said that it was one of her favourite courses. Not bad, although Tesco's pineapple fool is fine in comparison :S 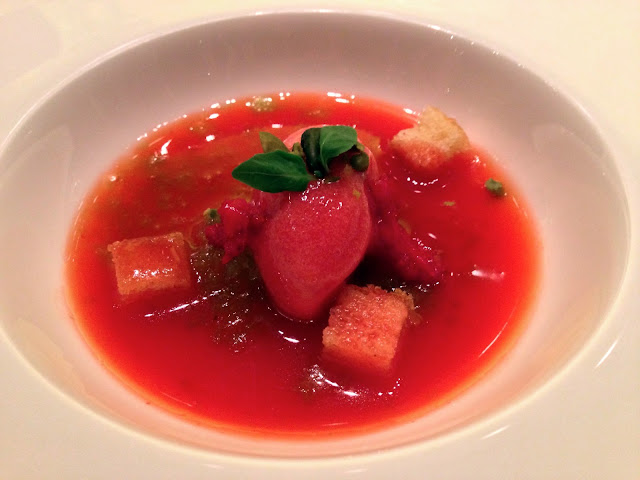 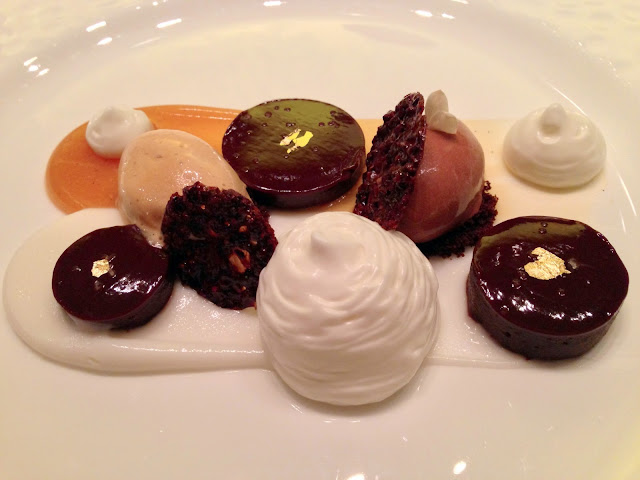 Caramel, chocolate, yogurt. Chocolate a bit too heavy at this point (stomach! I can't take any more food!) but the ice cream (that brown blob at 10 o'clock) was nice. But I must admit, I was struggling at this point.

But this was the last course. Not only did I feel like I had had a very nice meal, I feel like it was an accomplishment to finish all of that food.

Well, we had been eating for, woah, 3 hours. 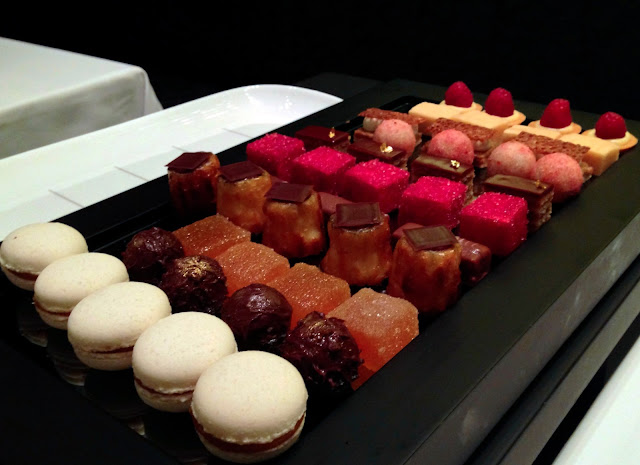 After the last course the waiter wheeled round the petit fours trolley. As pretty as each one looked, I couldn't handle any more food. Foood.....fatigue..... 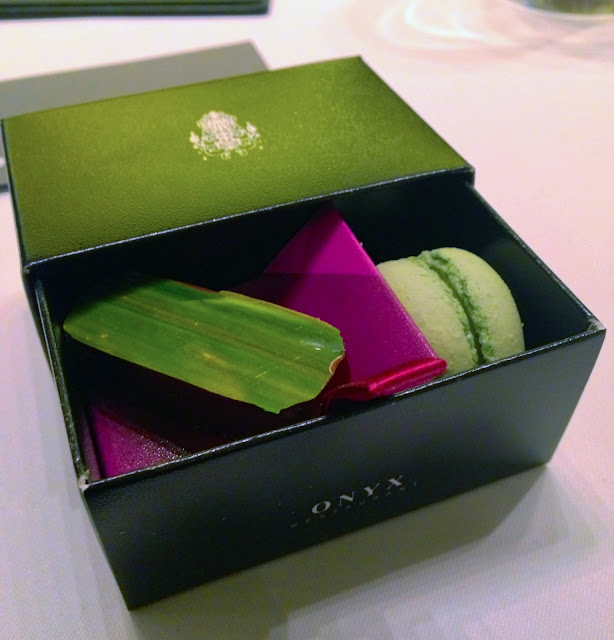 And then our waiter gave us each a box of petit fours to take home! How sweet :)

I had a mint macaron and salted caramel bar. A very cute momento of our visit :) 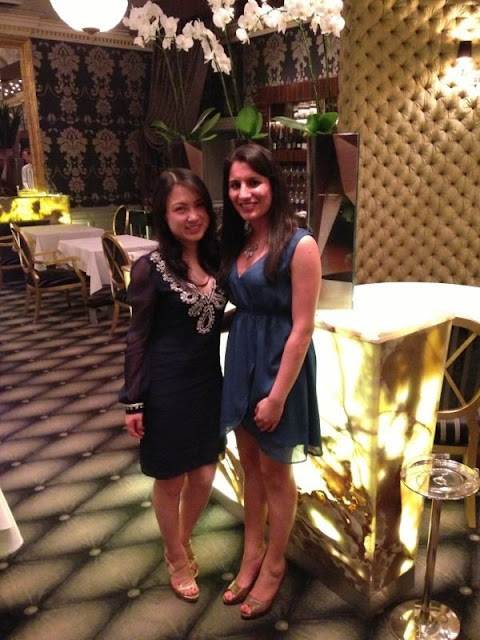 I must say that throughout the service was impeccable and the restaurant is absolutely beautiful. Our meal came out to £180 with service (no wine), which I think is on the higher end of tasting menus, but we did get close to 12 or 13 course with all of the pre-pre-compliments-of-the-chef stuff. And whilst I'm not food critic by any means I really enjoyed the dishes! But perhaps in smaller portions next time (or skip lunch during the day)!

Have a good week all!