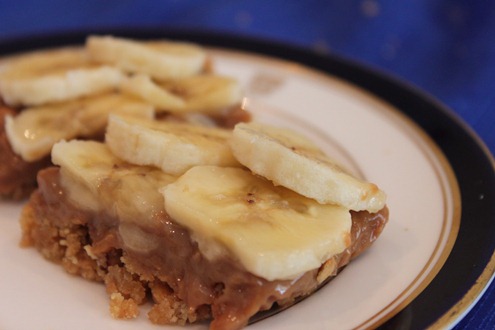 One fateful day, when we were minding our own business, fixing pipes, digging things up for no reason – you know, the usual – when we saw the village chief strolling along our direction. What did he want us to do now? More taps and standpipes? Or worse, a showerhead? No, he came bearing gifts (well, a gift), and – lo’ and behold – it was fresh fruit! (something we had not seen in a very long time). And not just any kind of fruit, it was a plant of about 20 or so mini Borneo bananas. They were brilliant, they were slightly brown, but most importantly, they were A BAKING OPPORTUNITY.

I have to say that this baking opportunity was missed by me due to other commitments (probably hair plaiting), but Sam and Alice did a great job given our rations. Despite the ‘offee’ part not coming out quite as expected, we all had a lovely dessert and an even lovelier sugar induced night of singing, charades and (eventually), sleep. Here’s the exact recipe that they used: 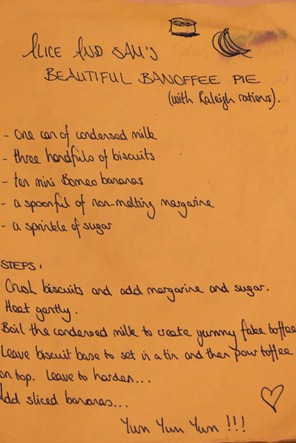 Making this at home was pretty easy to do, and didn’t take long. It also gave me an excuse to buy biscuits and condensed milk. Okay, I have to confess, that is why I choose to make this recipe next. It did not disappoint.

I started by making the base, adding some crushed pecans because I accidentally overestimated a ‘spoonful’ and the mixture was slightly too buttery. 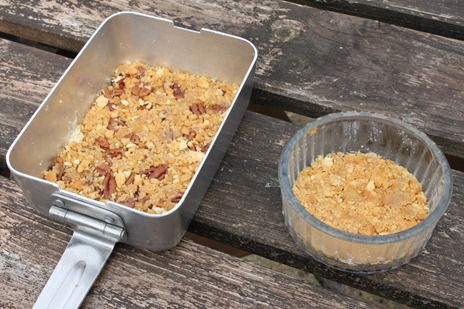 Making the toffee required some research, however. “Boil the condensed milk to create yummy fake toffee!” was slightly vague on how exactly to go about doing that. Do I pour it into a pan and heat until bubbling? Or do I stab some holes in the top and boil the tin in some water for 10 minutes? Well, it definitely wasn’t the latter, because that’s what we did in Borneo and toffee (even the yummy fake variety) was not the end result.

A quick search of google then told me that I had to boil the unopened tin of condensed milk for 3 hou- 3 hours?! Oh dear, that was a lot of waiting around time dangerously near the freshly replenished tin of biscuits. It had to be done.

And I waited…. and voila! Yummy fake toffee!

Surely the biscuit base had to have set by this time. So I began to pour the toffee on top… 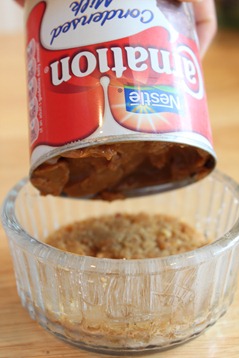 Except that it didn’t seem to want to pour. Or drop, or dollop, or just come out of the tin. But then, I realised, I wasn’t in the jungle anymore and had access to electricity (and namely a microwave)! All I had to do was heat it up and then surely it would pour faster than you can say ‘tropical rain’.

I was wrong. 2 minutes in the microwave only made it go bubbly and smell like feet (I am still unsure of how that happened). I guess it was time to use the trusty spoon and stir it. Damn technology. 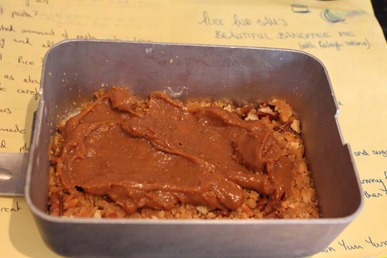 Now, for the last part, shedding out a thousand pounds and a 14 hour flight to get some bananas was probably a tad excessive, so I had to make do with British bananas instead. Actually, they probably weren’t even British. But anyhow, I only had to walk 5 minutes to buy them, which was a pretty good improvement on the previous time span.

And this was how it came out! 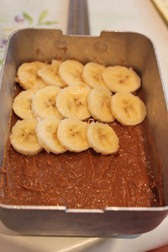 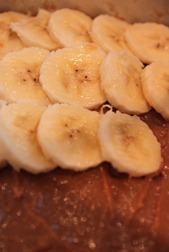 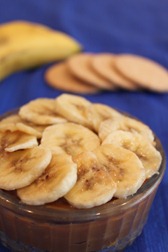 From mess tin or ramekin, this recipe proves that banoffee pie is accessible to all crockery, and is a very versatile recipe. A case of ‘don’t just try this at home, try it in the jungle too!’. 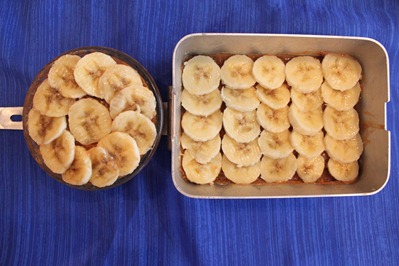 Lesson learned today: Don’t microwave condensed milk made toffee. Unless you have a foot fetish.
Posted by Xinmei @ Pudding Pie Lane at 21:37