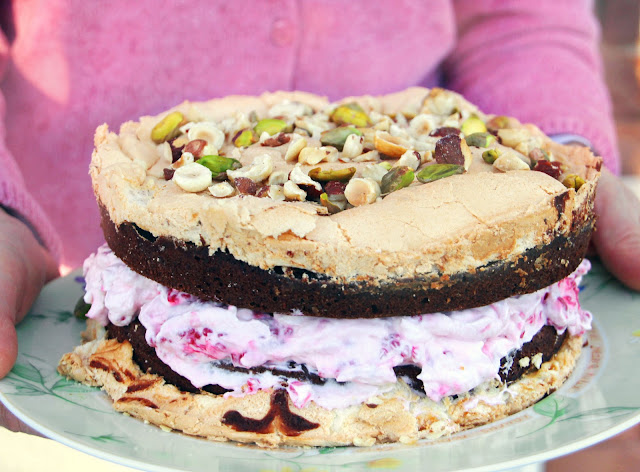 Probably the longest and most complicated cake I made made in a while. To me, it seemed the person writing the recipe couldn’t really make up their mind: do I like brownies…or cake…or, meringue! Or fruit cream? And…nuts, of the hazel or pistachio variety? Hm.

I’ll add them all!

So off I plodded through the recipe, one hazelnut at a time.
Literally – I only had shell in hazelnuts, the recipe needed 50 or so, roasted, skin off. The nutcracker is now my best friend. 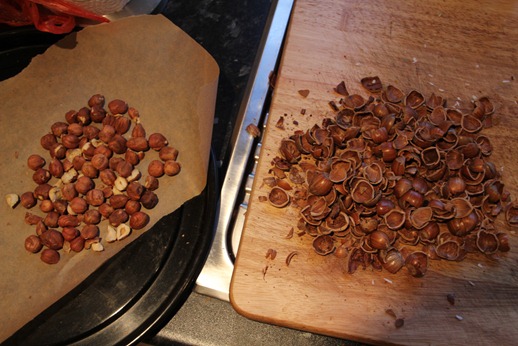 30 minutes later and many stubborn hazelnut shells painstakingly removed…nope, no, the nutcracker is definitely my worst enemy. 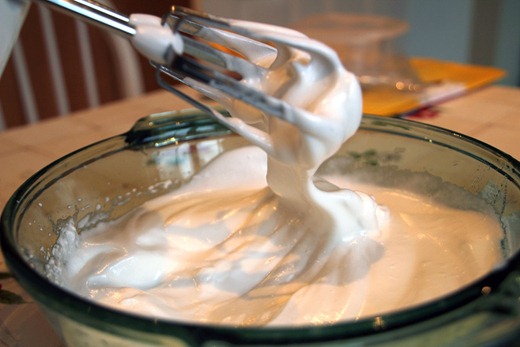 However, the electric whisk is, in my opinion, the Best Invention Ever. This is because it helps you make meringue, which is the Best Confection Ever. Also the whisk always gets bits of mix stuck to which is…the Best Snack Selection Ever?

I ran out of rhymes. 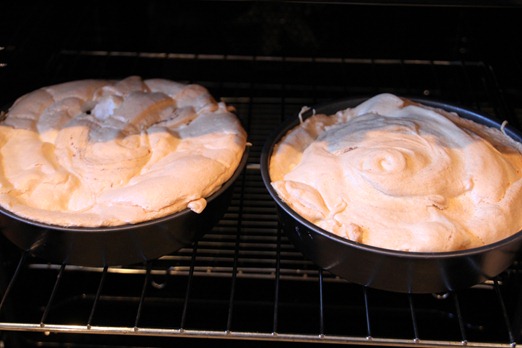 Here they are coming out of the oven! You may notice that there is a small chunk missing out of the left one. That, was to test if it was cooked. And the only way to test is obviously through tasting! 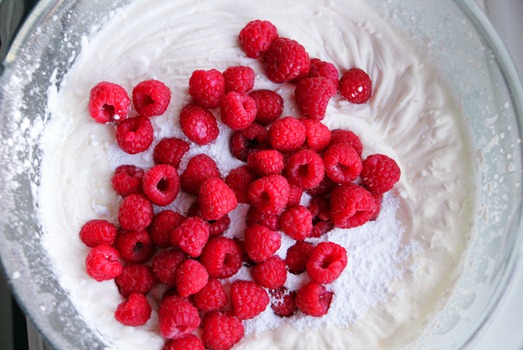 So, I don’t think I’ve actually described how I made the cake. First, I made the gooey chocolate brownie cake (can those words ever sound bad?), partially baked it, and spread the meringue on top, and baked it some more (hey, it’s more complicated than it sounds). The meringue was supposed to have hazelnuts in it, but I forgot (and after all that nutcracker malarkey as well. Stupid nutcracker. Stupid hazelnuts).

Then I sandwiched them together with raspberry whipped cream (did you know there are over 200 species of raspberries? Do they mean, like, Tesco’s-species, the Sainsbury’s-species, and for those special harvests, the premium Waitrose-species?).

Also, an ancient French myth about raspberries tells the story story about how raspberries used to be only white in colour, but a nymph named Ida was taking care of her sister who had lost her voice and couldn’t sing . She then picked some raspberries to soothe her throat (they obviously hadn’t heard of Lemsip), but scratched herself on a thorn and started to bleed.  Her blood dripped on the white raspberries, instantly turning them red and they have been red ever since. 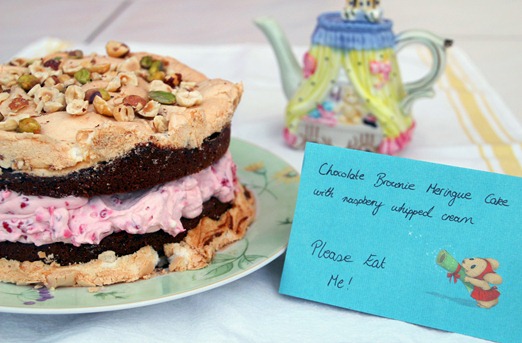 This cake was actually made for a ‘New Neighbour Party’ that we were holding (we bought the house 14 months ago), and I was afraid that everyone would think that it was more of a display cake and therefore wouldn’t eat it, which explains the sign. I also thought it would be a great opportunity to breathe ‘READ MY BLOG!’ down their necks but I was having trouble telling them to ‘read my sign!’. Essentially that sign is a eleven word summary of this blog post, so I think I’d lost that battle there.

Lesson learned today: If there are over 200 species of raspberries, there must be a hell of a lot of supermarkets out there that I haven't heard of.